Since new popular games look almost real, not leaving anything to player imagination, I found them not that interesting as old ones, especially legendary ones. I went so far into the gaming past and found many interesting concepts of playing that are nowadays almost extinct. Of course there're as well those genres that are now generally accepted. We could say that such genres are pioneers and ancestors of todays games. One such is Wolfenstein which started in fact 1981 on Apple II and Commodore 64 and it looked really simple. Castle Wolfenstein inspired Wolfenstein 3d, which was released 1992. There is good page about Wolfenstein through ages.  It helped to popularize FPS and is of great significance for todays shooters. It's interesting that I loved to play Wolf, but I'm not particularly interested in  Call of Duty or Battlefield, or even new Wolfenstein versions. Old one was really simple game, with no serious story, you are escaping from heavily guarded nazi prison, you start barefooted with knife and advancing through the similar looking, but different levels. All that had its own charm and it left a lot of things to imagination. However, today, people are taught to better graphics so they rather play remakes than original game. Me as well, so I found one really interesting, good quality remake, Wolfram. I had fun for a while, and soon came to the end of the game. It's pretty short, but I think that makers are just testing their new engine, so they made just first episode. My only complaint is that enemies in game look like some modern soldiers, only with swastika on their arms, so I decided to create cartoon versions of soldiers from original game. Here is the result.

And one in the game environment... 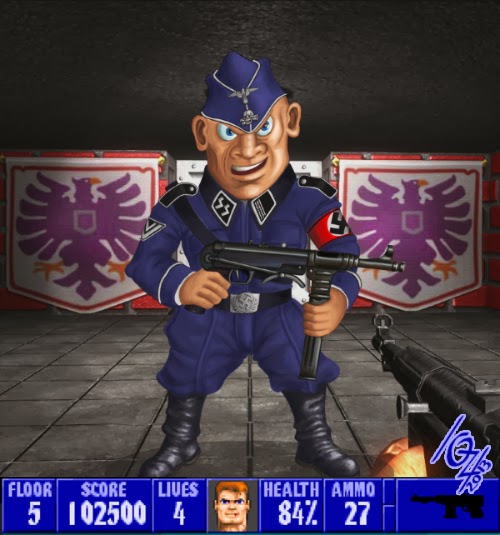 ...naturally here is also William B.J. Blazkowicz with some of his friends, ready to take care of these nazi guys.