Recently I played Total Annihilation again, maybe 4th time already. It's a game from 1998. It's pretty simple, two robot clans are fighting for predominance until they annihilate opposite side. Then it was a revolutionary game because all units were simple 3d models. A lot of similar games have been made since then but none would keep me awake all night as an original. This model is my version of Zipper, you can check all TA units here.

I like simple references like these, because they give you just basic idea of something and you are free to imagine everything else. My version would have two armor and weapon upgrades. Weapon upgrades are already done, next I'll be working on two other armors. I used 3ds MAX and a lot of 3d Coat, textures are made in Substance Painter, also used SP for weapon renders.

Put the video on 720p and loop. I can't find a way to predefined those options.

Finally here is a textured model. Not like one above but fusion of some units from Total Annihilation and TA Kingdoms. There is a little story behind this.

Those robots are in fact mining robots in distant galaxy on the planet that OREX Mining Corporation simply calls Site 13. The ore they dig is dangerous for humans, so there is a limited number of engineers overseeing the excavation process. People who are longer exposed to the unusual activity of the ore, begin to develop a variety of mutations. Unfortunately, for now, there is no known way to reverse the effect of ore on human beings. Mutants thus remain discarded in the Site 13 wasteland.

Technology is advancing rapidly and competing companies already own a newer generation of robot miners. So OREX has decided to replace the old models with new ones. Due to circumstances, the situation became more complicated for them.

Although prepared for the simple tasks of excavating, separating and sorting ore, old equipment began to evolve for unknown reasons and became aware of its existence. Everything that is aware that it exists, of course, does not want to cease to exist. Somehow, they knew that when the more perfect models came, they would end up disassembled at some galactic junkyard waiting for recycling.

So, by some miracle, silent diggers began to organize themselves, use repair shops to improve their performance, build their own war machines, develop new types of robots specializing in their survival. They began to acquire all the essential features of a primitive society, and even resemble a human tribe from the ancient past. They named their tribe, selected a chief, set totems with their sign, divided the tasks to each individual, and readily waited for a new OREX drone shipment which supposed to replace them.

Here is one of the most numerous and most important pillars of their defense. We can simply call him Warrior. 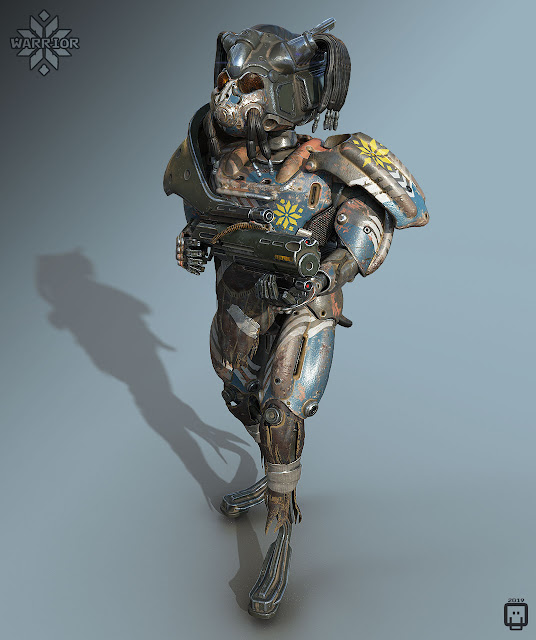 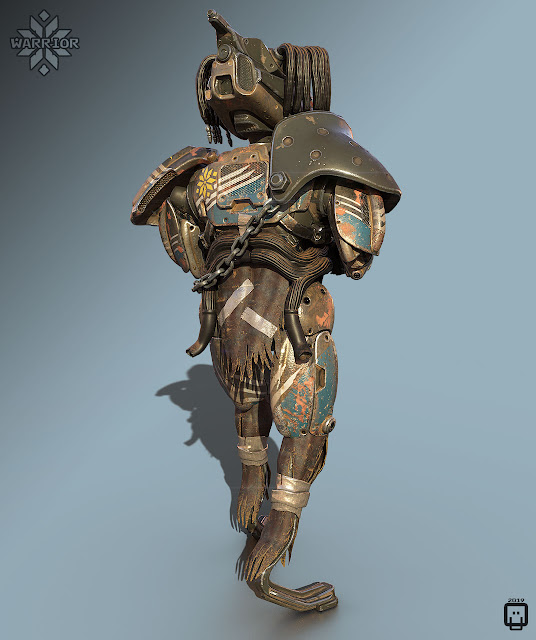 Symbolically crafted from parts of dead miners, the totems of the Metallicus tribe were raised across the entire areas in their control. Their function was not only symbolic, but a system of early warning and defense against potential intruders. It was the kind of network that could communicate with every member of the tribe and alert him to the danger that was coming. 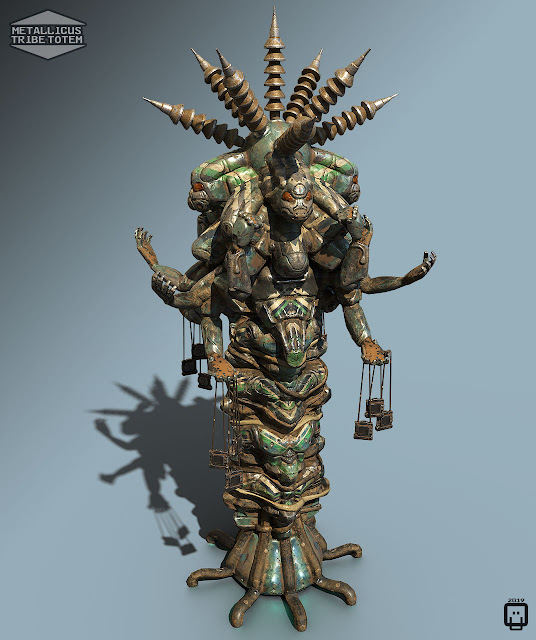 Processors of the fiercest warriors move into a specially formed detachment of berserkers. Armed to the teeth and equipped with jet pack they're in the true sense the death from above. Two fully upgraded laser rifles alternately firing deadly rays to the target, sharp blades in a rush from heights can penetrate most advanced armors and in the end there are sharp fangs that always win in melee.

Usually I don't paint over high poly models but this was fun and it gives me some guidelines for further modeling and texture creation. So here is the result.