Lately I've moved away a bit from the drawing and began a 3D project. Just to remind my self of modeling in 3ds Max. My biggest paranoia is that I will forget something very useful what i used to know. Since I was a kid I really liked this car and it looks so cool even today. I would say that Manta is something like german version of Ford Mustang or Ford Falcon from Australia (better known because of Mad Max movie). I plan to create it really detailed, inside of the car, maybe even machine. Also there will be two versions, normal one and one in apocalyptic style, don't know yet, I'm pretty far from ending now. I'm still collecting references, it's difficult to find some real good in higher resolution, not to mention blueprints, I hardly found this blueprints that are visible on the screen, they're very low resolution and slightly pixelated, I edited them in PS to have something that I can use. Otherwise there is a newer version of Opel Manta from eighties, it's also cool, but not as one from seventies. Maybe I'll do that newer version later. Texture is more for fun, to evoke the working atmosphere as in a garage. 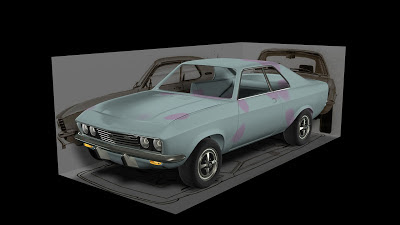 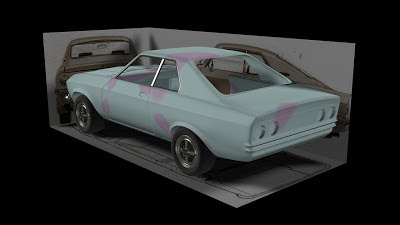 I fixed some errors in shape of the car, especially the rear part. Here are some screens of details that I'm working on. Axles and suspension, drive shaft, chassis and cage, made from bars. I really don't know anything about cars, but I'm trying to model all this things as close as possible.
I copied the references, but I soon became very frustrated as I do not understand how all these things work. It is much easier to model something, when you know what is the practical application of individual parts. I think I'll have to get some online manual for mechanics. Never is too late to learn something new.